This one goes back 20 years, to the earliest days of PowerLines; prompted by an off hand recollection at a customer site this morning. I’ve always been willing to jump in with both feet, and to pick up work however it showed up, especially in the early days.

Vivatech (Teterboro, NJ) was a start-up company intent on developing tools and processes designed to prolong the life of an X-Ray tube, through replacement and processing of the tube cooling oil. As background, an X-Ray tube is a fairly high dollar expendable for a CT scanner; with a lifespan measured in “slices”. The principal of Vivatech was a doctor who owned an imaging center, and as far as I can see, was simply pissed off at having to purchase replacement tubes. So he came up with the concept of periodically replacing and/or filtering the X-Ray tube cooling oil as a way to extend tube life, and obtained a patent – US 5440608 A: Method and system for extending the service life of an x-ray tube 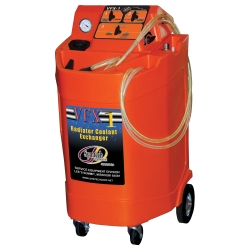 If you have seen the carts that the quick lube places use to process / replace automobile coolant, you get the idea.

To do this, he fitted his CT Scanner with some connectors to permit the cooling lines to be opened, a service cart with pumps, reservoirs, filters and valves inserted into the oil cooling system, a fairly complicated sequence or process intent on filtering the oil, replacing the oil, and then working the air bubbles out of the system. The claim: “The company has developed a tube maintenance program that it says can help tubes last for up to 300,000 slices, far more than the 75,000 slices that are the industry average.” (Diagnostic Imaging, July 1996). That’s pretty much the only online evidence that I can find that the company existed – the Vivatech name has been picked up by a variety of businesses and conferences / events in the ensuing years.

I got sucked in through the side door; I had worked with one of the principals on power quality issues at NJ area clinics; and ended up being brought in to consult in a bunch of areas:

I’d have to dig a bit for some photos, but I did find the Operator’s Manual for the Vivatech Service Cart (PDF) in my archives. Kind of a fun look back (for me, anyway). Put together in MS-Word, all the graphics are RF-Flow (if I recall correctly), interesting that we were working in B/W documentation back then (plenty of places where color would have been useful / advised, thinking of the cautions and warnings in particular)

The front panel (Page 3-2) was all me – we had transitioned from a hand-wired panel using 24 VAC relay logic and incandescent bulbs to a PC Board with mounted, square LED lamps (in one of three colors: Red / Amber / Green, before Blue LEDs came along).

The other fun part was adding some user diagnostics / indicators – the prototype unit simply had lights that turned on and off. I added all sorts of “value added” indications using the PLC to make the same sets of lights flash during operating (slow flash = normal / wait, fast flash = error / fault).

I also recall an intricately machined manifold that all the various valves, motors, filters, and ports were mounted on, and a large plexiglass reservoir to hold the in process oil.

Some of the wild and crazy engineering things I got involved with, back in the day. I’ll see if I can dig up some photos and add those.

Edit: No dice on the photos. I did find a box of photos that go back that far, and there was a divider in the box labelled “Vivatech”, but no photos. I recall putting everything to do with that project (hard copies, manuals, PLC hardware, spare PC boards, photos, etc.) in a box; and years later donating all the tech to a local makerspace. I imagine I tossed the rest at that time. It was back when you developed a roll of film carried the photos around, and if you needed something electronically, you scanned it (180 degrees away from today, when a hard-copy photo is exceptional). I could be wrong; things sometimes turn up in odd boxes or shelves, but for the moment, I think I’m out of luck.